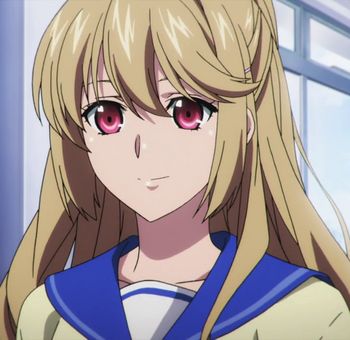 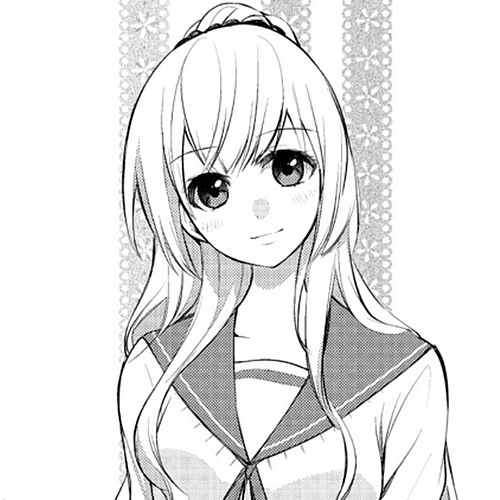 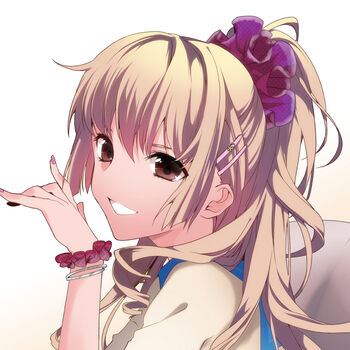 Episode 1: Right Arm of the Saint I

Volume I: Right Arm of the Saint

</section></aside>Asagi Aiba (藍羽 浅葱, Aiba Asagi) is a high-school student studying in Saikai Academy and is the classmate of Kojou, Motoki and Rin. She is the childhood friend of Motoki due to both of their families being connected with the Manmade Island Management Corporation, a close friend of Rin and a friend of Kojou whom she has a crush on. She works as a part-time programmer at Manmade Island Management Corporation.

Asagi is a high-school girl who has red eyes and long blonde hair that is curled at it's end and passes through her shoulder with a fringe and bangs at either side of her face and she has a long pony tail tied by a pink ribbon. She wears the Saikai Academy uniform with a sweater. She wears a pink ribbon on her left wrist. Asagi's friend said that her skin, face, and her body are beautiful in general.

Asagi and Kojou enter their classroom to see their classmates discussing about the approaching games where they assigned Asagi to be Kojou's partner in the Badminton game. Asagi suddenly blushed and knew that Motoki is the one who planned it then, Kojou tells her that it's okay for him to play. Asagi goes to Girl's changing room to change her clothes with her friend. While changing skirt, she looked at the mirror to see what herself is look like, she makes cute faces at the mirror and then suddenly got ashamed of herself and yell "Stupid or Idiot".When she go out to find Kojou, she saw Kojou with Yukina and saw that Kojou was holding a letter (Asagi thought that the letter was a Love Letter for Yukina) and said that looks like she's disturbing something (what she knows is that Kojou is inviting Yukina on a date) so she leaves. It was seen that she was crouching over Akatsuki in a seductive way ,following the suggestion of Motoki "How to set up a Honey-Trap?".Akatsuki was sleeping then.When he saw her,he was flustered.Just the moment he was about to move her away,they fell from the bed.This scene was seen by Himeragi and Nagisa causing them to misunderstand Akatsuki.It was probably seen by War Dancer,Sayaka through a sparrow.Asagi saw Kojou using his powers after he was injured by Sayaka. Kojou was unable to control his power and upon seeing Asagi near, Kojou accidentally threw her away where she hit the wall and became unconscious. Then, she was brought by Yukina to the Medical Room, when she woke up, she saw Yukina, Astarte and Nagisa there. She asked about what had happened where Yukina responded trying to quell the situation. Somewhat believing the façade, Asagi asked Yukina what her relationship with Kojou was, to which Yukina struggled to answer. At this point the Black Death Star Faction invaded the Medical Room to abduct Asagi for her intelligence in deciphering codes. Nagisa had a panic attack on seeing the demons but was knocked out by Yukina. Astarte tired to stop them by releasing her familiar but was shot and injured. The terrorists kidnapped Asagi and company while Asagi is programming all Nalakuvera and brought them in a storage room. The man told Asagi to programmed the strong weapon they called "Nalakuvera", but she refused to do it, but the man told her that if she's not able to do that the man will toast her friends, that's why she was forced to do it even though she doesn't want to. After that, she was able to fixed all of it, while Kojou and others are fighting with the 3 Nalakuvera's.

Asagi ask Kojou to go in the Art Club. When the two of them are in there, asagi ask kojou to go undress and wear the clothes that asagi gave. When Kojou refused to, Asagi said that if he's not going to wear it then she will go undress, and when Asagi already is stripped Kojou agree to wear it. When Kojou wear it, Asagi wear a maid dress. Then, asagi took a picture of Kojou. Kojou was shocked and ask Asagi why she did that then, Asagi said she want too. While Asagi is taking picture of Kojou, Kojou took his cellphone and he took a picture of asagi and said that it is unfair if asagi will only take my picture. Then, on the last picture Asagi took a picture on the two of them. 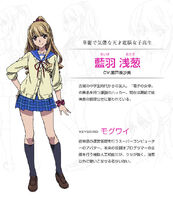 Aiba Asagi Character|thumb
Add a photo to this gallery

Retrieved from "https://strike-the-blood.fandom.com/wiki/Asagi_Aiba?oldid=17464"
Community content is available under CC-BY-SA unless otherwise noted.