Asagi is a beautiful high-school girl with long blonde hair that is curled at it's end and passes through her shoulder with a fringe and bangs at either side of her face with a long ponytail tied by a pink ribbon and red eyes. She is normally seen wearing the Saikai Academy uniform with a sweater. She wears a pink ribbon on her left wrist. Asagi's friend said that her skin, face, and her body are beautiful in general. 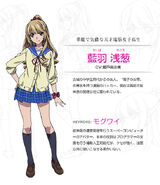