Astarte (アスタルテ, Asutarute) was a homunculus servant of Rudolf Eustach until Kojou and Yukina defeated him. Since then she has been sentenced to 3 years probation and is currently entrusted to Natsuki, who made her her maid.

Astarte has blue eyes and blue hair. Because she is a homunculus, her face is expressionless most of the time. She is shown wearing a white cloth in the Armored of the Saint arc. Beginning the Emissary of Warlord arc, she starts wearing a maid outfit. 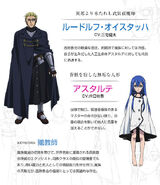 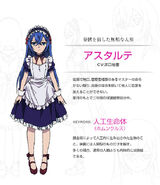 Because Astarte is a homunculus, she expresses little to no emotion. She is not talkative and always says "Accept" in a dull, robotic tone whenever she answers. In the anime, after she was under the supervision of Natsuki, she gradually displayed more emotions with her interactions with the other characters. In Volume 8 of the light novel, she is showing indication of independent thought and emotion.

Being a homunculus, she has no parents or relatives. Presumably, she spent her days before the story timeline in Rudolf's secret lab, undergoing various experimentations to implant a familiar into a homunculus, a feat which has been thought impossible. She's the first successful familiar-implanted homunculus ever existed.

Retrieved from "https://strike-the-blood.fandom.com/wiki/Astarte?oldid=25219"
Community content is available under CC-BY-SA unless otherwise noted.