Start a Wiki
This article is a stub. You can help Strike The Blood Wiki by expanding it.

Beatrice Basler (ベアトリス・バスラー, Beatorisu Basura) is an employee of Magus Craft. She works in the Research Department, and serves as Kensei Kanase's secretary.

Beatrice has light purple eyes and blonde hair. She normally wears a magenta jumpsuit with her hair loose. When she disguised as the assistant of Kensei, she wore glasses, a maroon blazer and skirt with her hair clipped. 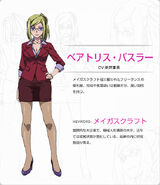 She's a vicious, callous and, eventually, coward woman, fond of her fighting skills even tough her intelligent weapon does most of the job.

She feels frustrated when Yukina, younger and shorter than her, beats her up in hand-to-hand combat.

In the Island of Exile, she fights Yukina and Beatrice's lack of skills leads her to her pathetic demise.

Retrieved from "https://strike-the-blood.fandom.com/wiki/Beatrice_Basler?oldid=22670"
Community content is available under CC-BY-SA unless otherwise noted.