Dimitrie Vatler (ディミトリエ・ヴァトラー, Dimitorie Vuatorā) is a direct descendant of the Lost Warlord and is a duke of the Warlord's Empire that rules the Ardeal principality. He has devoured two second generation vampires in the past, also making him an existence that is close to that of a Primogenitor.

Vatler has blonde hair and blue eyes. He is considered very handsome. He is often seen wearing a white blazer over a white vest on top of a lavender-colored long sleeves, with a dark blue tie and brown shoes. 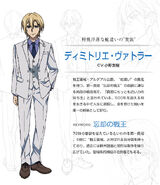 He is depicted as a type of pleasure-seeking person, with ambiguous state of morality and questionable taste for entertainment. Most of his deeds apparently stemmed up from his boredom. However, he somehow has managed to juggle his personal interests so carefully that they don't hinder his permission to stay at Itogami Island, a solid proof of his smartness.

He was involved in Black Death Emperor Faction's wipeout by the Dominion fifteen years before the main storyline, in which he managed to kill its leader.

From the Warlord's Empire[]

Dimitrie was first seen on the Oceanus Grave II, with Sayaka Kirasaka as his watcher. He sent an invitation to Kojou Akatsuki for his party.

Fiesta for the Observers[]

The Tyrant and the Fool[]

Vampiric Abilities: As a vampire, he possesses superhuman strength, speed, reflexes and durability.

Familiar Summoning: He can also summon Beast Vassal. Dimitrie, so far, has a total of 9 Beast Vassal and all of them are snake-shaped.