Strike The Blood Wiki
Register
Don't have an account?
Sign In
Advertisement
in: Characters, Human, Aldegyr Kingdom,
and 2 more
English

Kanon Kanase (叶瀬 夏音, Kanase Kanon) is the half-sister of Polifonia Rihavein, the aunt of La Folia Rihavein and the adoptive daughter of Kensei Kanase. She is a middle-school student studying in Saikai Academy and the classmate and close friend of Yukina Himeragi and Nagisa Akatsuki.

Kanon is a beautiful girl who looks similar to La Folia Rihavein, but Kanon has shoulder-length white hair that is braided by a violet ribbon at the end on the left side with bangs hanging over her eyebrows and clear blue eyes.

She wears the normal Saikai Academy uniform and she wears violet underclothes on the inside of her uniform. 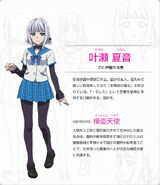 Kanon has a very kind and gentle heart who has a tendency to call Kojou Akatsuki "Onii-san". She also is quite fond of Kojou especially when she realize that Kojou is always doing his best to protect her & his friends.

Kanon the only survivor after Kou Amatsuka attacked Adelard's monastery that she grew up in. Due to her kindness (as seen by her picking up of numerous stray cats), she is called the middle-school saint. After the Angel Faux incident, Natsuki Minamiya became her guardian as well as Astarte's mentor. In addition, she is being watched and pampered by Aldegyr for safeguarding through escorts and surveillance satellites due to the fact that she's the half-sister of Aldegyr's Queen.

She is actually the illegitimate daughter of La Folia Rihavein's grandfather who is without a doubt royalty while she has no right to the throne.

Kanon Kanase is an ordinary high school student with very little physical abilities. However when Kensei inserted Angel Circuits into her body she began to transform into another form which had far greater levels of ability.

As an Artificial Angel she had abilities that came close to rivalling a Progenitor.

The Ability that comes from the insertion of Angel Circuits that will transform one into a being Close to God giving the user immense power including the control and manipulation over Realty and Dimensions.

When this form appears two extra sets of wings manifest and strange red eyes appear upon the wings through which attacks can be launched.

Abilities from this form are unknown as her powers are removed by Yukina Himeragi then defeated by Kojou Akatsuki.