Kojou Akatsuki (, Akatsuki Kojō) is the male protagonist of the story. He is the older brother of Nagisa Akatsuki and the childhood friend of Yuuma Tokoyogi. Although he appears to be a normal high school student studying in Saikai Academy, he is actually the fourth primogenitor; the strongest vampire in existence, an immortal demon thought only to exist in legends. He became a vampire and the fourth primogenitor only three months before the beginning of the story. For much of the story, he cannot remember how he became a vampire and gets an intense headache when he attempts to. Yukina Himeragi is sent from the Lion King Organization to observe him and to eliminate him if he is deemed dangerous.

Kojou is 16 years old at the beginning of the story. He has dark silver-blue hair and blue eyes which turn red when he is either aroused or angered. He is usually seen wearing the Saikai Academy school uniform which consists of a white button up shirt and black pants. He also wears a blue under shirt and a white hoodie. Since he is a vampire and tends to avoid daylight, he has fair skin. He has well-toned muscles and a "well-endowed" body. 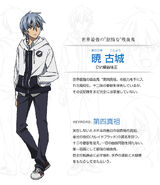 Kojou is a kind, empathetic person, who goes out of his way to help others. He is also an intelligent, sly and carefree individual. When angered, Kojou becomes quite fearsome adversary. Kojou has indomitable willpower, supernaturally strong charisma which has attracted the attention of both admirers and allies, allowing him to even befriend his enemies. Kojou is shown to care and worry about his sister a lot. He is however generally oblivious to the romantic feelings that others have of him due to his strong siscon nature.

Kojou was a normal human until he first met Avrora the 12th Kaleid Blood and became her blood servant, a pseudo vampire. Since then, he spent his daily life with her but those days didn't last long until she ordered him to destroy her and became the fourth primogenitor. In addition, he lost his memories regarding the incident and the days they spent together. However, he later regained some portions of it after fighting Giada, the third primogenitor disguised as Avrora using the No.14 Grimoire in attempt to recover his lost memories. He fully regained his memories alongside Asagi after Yukina performed a ritual on them.

He first met Yuuma when he was trying to retrieve Nagisa's hat which was stuck on a branch at the end of a cliff. He looked for Yuuma at her regular spot where she used to hide and watch both siblings everyday and asked for her help. Without waiting for a respond he quickly grabbed her hand and got back the hat together. However, after they did so Kojou nearly fell off the cliff only to be saved by her, he later thanked her and said that she's pretty strong. A while later after everyone introduced themselves. He first met Motoki and Asagi during middle school.

He first met Avrora at Fairy's Coffin. Kojou used his body to protect his sister and Avrora from the terrorist attack leaving him on the verge of death. Avrora admired his courage and turned Kojou into her blood servant. Avrora ordered him to destroy her alongside "Root" and chose him as the 12 Kaleid Blood's successor.

When Kojou was in middle school, he participated in his school's basketball club and seemed to have performed very well, winning a city championship and Most Valuable Player. However, Kojou's skills were so high that it became nearly impossible for his other teammates to keep up with him and eventually gave up, leaving it to Kojou to win the games for them. During one game, Kojou was trying to score a point when one of his opponents attempted to stop him with a foul. As a result, both Kojou and the opposing player were injured. Kojou was so shaken by this incident that, shortly after, he quit the basketball club. Even though he isn't part of the club anymore, he is still sometimes shown playing basketball in the light novels and anime.

The Right Arm of the Saint

Returning from a study group, he senses that a girl is following him. He tries to lose her, but then spots her being harassed by demons. A fight ensues, and Kojou steps in before things escalate further. He then catches a glimpse of her panties and she leaves in disgust, but drops her wallet. Inside contains her student ID and name, Yukina Himeragi.

They meet again the next day, where she explains her task and the significance of him being a primogenitor. One night, the two head to a convenience store, when an explosion occurs. They investigate the source and discover Rudolf Eustach and Astarte. They began to battle, but it abruptly ends when Kojou loses control of his familiar.

From the Warlord's Empire

Fiesta for the Observers

The Tyrant and the Fool

Bride of the Dark God

Kojou receives an unusually heavy package from Dimitrie Vatler. Though suspicious, he and Yukina decide to open it, and discovers a girl inside. They later identify her as Celesta Ciate.

The 4th Primogenitor on the run

Kojou's father, Gajou Akatsuki, returns suddenly and brings Nagisa to mainland Japan for undisclosed reasons. As the days pass, he becomes more concerned about her, and even more so when a corrupted image of a magic circle is sent to his phone.

The Knight of Sinful God

The Roses of Tartarus

The War Of Original Vampires

Holy Knight of the Sunset

Despite being relaxed, he has repeatedly shown himself to be very intelligent, intelligent and quick to learn; Although these traits are not usually shown because they tend to charge without thinking, but can be impressively logical, observational, deductive and tactical. These traits made him an excellent leader.

Enhanced Vampiric Abilities: Kojou possesses supernatural strength, durability, agility, consciousness, speed, senses, regenerative abilities, pheromones, endurance and immortality. Being the Fourth Primogenitor, his incredible powers are far above most vampires. Kojou is absolutely immortal, which means that he does not get old or sick and will recover quickly from any damage he receives, even from discarding or complete incineration.

Familiar Summoning: Kojou has twelve familiars who are manifestations of his vampire's powers. Initially, these familiars would not obey Kojou completely and would often go crazy. This is due to the fact that he refused to drink human blood and, therefore, would not recognize him as their master. However, he was able to control his familiars and summon them properly once he drank blood.

Cleansing: A phenomenon that alters the laws of physics and magic, fundamentally allowing its user to warp reality.

I, Akatsuki Kojou, successor to the blood of "Kaleid Blood", now release your constraints. Come ....(number and name of the familiar)

カレイドブラッド"の血脈を継ぎし者暁古城が汝の枷を解き放つ疾く在れ ...(number and name of the familiar)

The means to awaken this familiar was Kanon. It is a sheep with more than ten thousand diamonds that cover its entire body. This familiar is able to manipulate diamonds. It is able to disperse or scatter them like shotguns and form shields that reflect various attacks and abilities, which makes it well balanced in attack and defense. The diamonds are strong enough to block the ability to eat the dimension from Al-Meissa Mercury. First appears in Season 2 Episode 5.

Familiar of amber with an ox head, whose body is composed of lava. It has a body of more than 10 meters high and carries an even larger battle axe. Manipulates both lava and tectonic plates, but it mainly attacks in close quarters. The medium for this familiar was Glenda.

This is the third familiar shown in the series. Kojou took control of it after drinking both Yukina's and La Folia's blood. It is a double-headed serpent dragon that is also called the Dimension Eater. This familiar is capable of eating space itself along with the dimension. It is able to destroy Angel-Faux Divine Oscillation barrier. This is one of Kojou's most dangerous familiars as it can even leave severed space after it's attack which may pose danger for third parties.

The medium for this familiar is Sayaka and Yuuma. It is a silver crayfish with blue flames on it's claws. This familiar is capable to render anything ethereal by producing mists. Due to the fourth primogenitor's strength, the mists are able to cover the whole island without any difficulties. In episode 19, it is said that this familiar was only half-materialized as a wound on Kojou's chest (when Himeragi stabbed Kojou). The mists are strong enough to ward off reality warping. First appeared in Season 1, Episode 19.

This is the first familiar shown in the series and is commonly used by Kojou. Kojou took control after drinking Yukina's blood. It is a lion-like familiar who has bright red eyes and has a lightning-like mane. This familiar is capable of producing and manipulating electromagnetic energy. Kojou can manipulate the beam to create a force field around him. The ray is strong enough to destroy a barrier of divine oscillation and neutralize Wiseman's Blood energy beam, which was already capable of atomic-level destruction.

The War Maiden (Valkyrie) that holds the rainbow-coloured sword of light. Manipulates laws of nature and also carries the cause and effect cutting ability. Kojou obtained this familar from Yukina, after it was left to her, in his battle against Vatler. First appears in Season 3 Episode 10.

The medium for this familiar is Yukina and Sayaka. It is an intelligent-type weapon, a gigantic demon sword over 100 meters in length. This trident-like sword is capable of manipulating gravity. It can obliterate a few dozens of kilometers if swung from a high altitude. First appears in Season 2 Episode 3.

The medium for this familiar is Asagi. It is a man-eating tiger that is wrapped up in purple flames. It can manipulate poison and can make antidotes, as well as steal the magical power from other familiars. First appears in Season 3 Episode 10.

This is the second familiar shown in the series. Kojou took control of it after he drank Sayaka's blood. It is a bicorn-like familiar having glowing purple eyes, black-colored skin, purple fire-like mane and has glowing plate-shaped armor floating around its neck. This familiar is capable of producing and manipulating sound. It is able to create sound quakes and waves. It can tear molecules at an atomic scale by emitting high-frequency vibrations from it's entire body. It first appeared in Season 1 Episode 8.

The whole body is covered with silver crystal scales. It has the form of an Ichthyosaur with one crystal horn that resembles that of a goat's. It's ability is mental and spiritual manipulation. It demonstrated a power that was strong enough to dominate Kojou's other familiars when it was used by December from Tartaros-Roses. The medium for this familiar was Yukina and Yuiri.

Avrora awakened this familiar by force while in Nagisa's body and subsided by, then gained control of it after drinking Yukina's blood. It is a combination of an undine and a snake. This familiar is capable to revert phenomenon to its original state which is nothingness. Due to this ability, Kojou is able to recover from any kind of injury including decapitation as shown in the series. It is able to erase conceptual existence. First appearance in Season 1 Episode 22.

This familiar can manipulate water and lower the temperature below absolute zero, which was first seen when Avrora used the body of his sister Nagisa to instantly freeze the ocean around them when they were attacked by Wiseman's Blood, and once again when Nagisa was taken to Kannawa.

Retrieved from "https://strike-the-blood.fandom.com/wiki/Kojou_Akatsuki?oldid=26678"
Community content is available under CC-BY-SA unless otherwise noted.