Start a Wiki
This article is a stub. You can help Strike The Blood Wiki by expanding it.

Kou Amatsuka (天塚 汞, Amatsuka Kō) is an antagonist in the Strike the Blood series. He is a homunculus alchemist who is Nina Adelard's apprentice. He wishes to become human by reviving Wiseman to restore his body.

He wears a white suit and a red checkered hat. He also wears gloves.

alchemy: transformation parts of him body (as hand) to any form of metallic (as knife) or Manipulate it. also he can transformation other metal and its Absorption (as form of regeneration).

his power include iron, mercury, ...etc.

Source of his power come from black core in his chest. 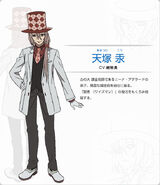 Add a photo to this gallery
Retrieved from "https://strike-the-blood.fandom.com/wiki/Kou_Amatsuka?oldid=22926"
Community content is available under CC-BY-SA unless otherwise noted.