Strike The Blood Wiki
Register
Don't have an account?
Sign In
Advertisement
in: Characters, Female, Human,
and 3 more
English

La Folia Rihavein (ラ・フォリア・リハヴァイン, Ra Foria Rihavuain) is a princess of Aldegyr. She is the daughter of Lucas Rihavein and Polifonia Rihavein and the niece of Kanon Kanase. La Folia was pursued by Magnus Craft because they wanted the blood of a person from the Aldegyr royal family for their experiments. She becomes Kojou Akatsuki's third blood partner in order to activate his third familiar and save Kanon from Magus Craft.

La Folia is a very beautiful pale skinned girl with hip-length silver hair that has bangs hanging over her face where it mostly hangs over on the right side and clear sky-blue eyes.

She carries a medium-sized curse pistol with a knife attachment, similar to a bayonet and appears to be a very skilled shooter with it. She wears a jacket-like trench coat, with a white button-up shirt and black skirt. She is seen wearing a blue pendant gemstone with red ribbons, possibly indicating her royalty status. She also has golden chains looped around her left shoulder. 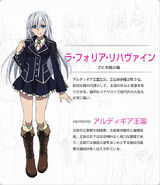 La Folia seems to be quite a cheerful young woman who is also quite friendly. Even though she just met Kojou Akatsuki, she seems to care for him as much as Yukina Himeragi does for him. She also willingly desired to help Kojou when he was injured, and such was giving him her blood, to which he would drink later on in order to awaken the Third Familiar with the help of Yukina's blood as well.

Not much is known about La Folia's history, but she comes to protect Kanon Kanase.

Enhanced Agility: La Folia is shown to be extremely agile in combat, allowing her to be able to jump several feet into the air.

Daughter of the gods that is within me... Protector of armies, age of the sword, bringer of victory and deliverer of death!