Edit
watch 01:36
We're Getting Mutants in the MCU - The Loop
Do you like this video?
Play Sound

Nagisa Akatsuki (, Akatsuki Nagisa) is the daughter of Gajou Akatsuki and Mimori Akatsuki, the younger sister of Kojou Akatsuki and a childhood friend of Yuuma Tokoyogi who attends Saikai Academy where she is good friends with Yukina Himeragi and Kanon Kanase, who are all in the same Class 3-C.

Nagisa has black hair that is usually tied up in a high ponytail by a mint-blue ribbon with bangs hanging over her forehead and reddish-brown eyes.

She is usually seen wearing the Saikai Academy uniform. 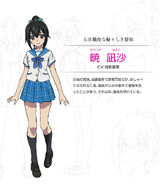 Nagisa has a cheerful and playful personality who very chatty with people she likes, such as Kojou Akatsuki or Yukina Himeragi.

She sometimes seems to lacks the ability to read to mood. An example of this was when La Folia Rihavein kissed Kojou, she seemed to be only excited and curious about it not at all considering the predicament of her brother among the angry stares of Yukina, Sayaka Kirasaka and Asagi Aiba who were all jealous. She also has a certain dislike to Sayaka, due to an earlier incident where she attacked her brother and acted hostile towards her grabbing her arm to not let her run away. She also has a tendency to address her family members by their names.

Nagisa had trained as a spirit medium with her grandmother. She also inherited the blood of a hyper adapter from her mother making her an extremely rare hybrid. Four years ago, she suffered serious injury caused by the meddling of the Black Death Emperor Front during the excavation of Avrora Florestina. She was left in a vegetative state and was brought to Itogami Island to receive special treatment. Unknown to others, Nagisa was being possessed by "Root". Roughly about three and half a year later, "Root" had awakened as the fourth primogenitor in Nagisa's body and hunted the other Kaleid Bloods to consume them. Having no memories of it's own, it began to feed on human's memories as memories are sources of magic and mass vampire turning incident occurred creating havoc in Itogami Island. However, Avrora and Kojou Akatsuki managed to destroy "Root". Nagisa managed to transfer Avrora's consciousness inside herself just before she perishes. Since then, she lost her powers and any memories related to Avrora. After the incident, her mother became her personal physician.

Four years ago, Nagisa was involved in a train accident caused by demons in Rome, which was actually a false memory to replace the event of excavating Avrora Florestina. Even though she's been cured by receiving special treatment at Itogami Island, her fear of demons remain unusually strong. She is still traumatized, and freezes up whenever she sees a demon. The actual cause of her trauma is being possessed by "Root".

She first met Amari after both Kojou Akatsuki and Yuuma Tokoyogi retrieved her hat which was stuck on a branch at the end of a cliff. After they were safe everyone introduced themselves.

Right Arm of the Saint[]

Emissary of the Warlord[]

Night Lord of the Blazing Light[]

Tyrant and The Fool[]

Psychometry: As a priestess who carries the blood of a hyper adapter, Nagisa has been sought by universities and institutions to locate ancient ruins and decipher ancient epigraphs using her psychometry. However, she lost her powers due to trauma.

Avrora's Personality: Avrora Florestina's consciousness currently resides within Nagisa. Being the 12th Kaleid Blood, she is able to summon the 12th familiar Alrescha-Glacies. The abilities of this familiar are being able to decrease temperature to absolute zero.