Natsuki Minamiya (南宮 那月, Minamiya Natsuki) is an English teacher at Saikai Academy and she is one of few people who knows that Kojou Akatsuki is the Fourth Primogenitor. Outside of school, she is a high ranking attack mage and is referred to as "Witch of the Void".

It is revealed that she is the guardian ("the jailer, the door, and the key") of the legendary magical prison that houses the most dangerous supernatural criminals, with her body being sealed inside the prison and while the version of her that appears outside of the prison is merely an illusion. In the Banquet for the Observers, Natsuki's memories were taken by Aya Tokoyogi. She teleported herself near the Keystone Gate where she instinctively recognized Asagi Aiba who then after took care of her and gave her the temporary name, Sana . After defeating Aya, Natsuki regained back all of her memories.

Don't address your teacher with -chan!

Natsuki has long black hair that has a fringe and long bangs on either side of her face and dark-blue eyes. Although she is an adult, Natsuki appears to be much younger because she has been in an enchanted sleep for 10 years of which have made her body not age. Her child-like appearance prompts Kojou Akatsuki and Asagi Aiba to call her Natsuki-chan, much to her chagrin.

She is usually seen wearing a gothic lolita outfit and carries a black parasol. While undercover as a student in order to discover who was molesting her students on the monorail, she wore the standard Saikai Academy uniform, plus thigh-high socks and a school bag.

While inside the Prison Barrier, Natsuki adjusted her appearance to be more adult-like to match her actual age. Natsuki's adult form is much taller and has a larger bust size compared to her usual form. 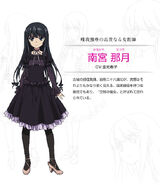 Natsuki as an adult

More images can be found at Natsuki Minamiya/Image Gallery

Natsuki has a childish personality who is very stubborn, but she is very caring as she took Astarte to a festival so that she could enjoy and finally Astarte started showing expressions of delight. She also likes to tease people which is shown when she teased Kojou Akatsuki about getting aroused around Yukina Himeragi in public.

Natsuki first met Gajou Akatsuki after Fairy's Coffin was attacked by the Black Death Emperor Faction. Afterward, Gajou asked her to look over his children while he went to find a "cure" for them.

Right Arm of the Saint[]

Natsuki checks Kojou Akatsuki's make-up tests where Kojou inquired her about the Lion King Organization. She pulls him by the ear and asks him where he heard about it. Kojou lies that he just heard from some rumor about it but lets him get away with his actions. Later, she catches Kojou and Yukina Himeragi in an arcade but when she approached them a sudden explosion distracted her, making them have a chance to escape though leaving the Nekomatan they won at the arcade. The next day, she calls them and announces about what they did after running away last night which caused the boys to have a wrong impression. The trio then talk about the explosion last night and she then says that a demon hunter is on the loose. She gives Yukina her Nekomatan. Later, she investigates the scene of the explosions.

Emissary of the Warlord[]

Natsuki fought alongside Kojou Akatsuki, Yukina Himeragi and Astarte against the angel-like beings.

It is revealed that she is the guardian ("the jailer, the door, and the key") of the legendary magical prison that houses the most dangerous supernatural criminals, with her body being sealed inside the prison and while the version of her that appears outside of the prison is merely an illusion.

When Natsuki was attacked by the escaped prisoners of the legendary magical prison, she escaped by teleporting herself to a place where one of her own students, Asagi Aiba was present and reverted to her childhood form. She was robbed of her memories and powers by Aya Tokoyogi. Natsuki later regained her powers and memories by drinking Kojou Akatsuki's blood when he bled in the bath. When she regained her powers, her guardian soldier, Rain Gold was summoned but because Rain Gold's attacks could cause potential damage to Itogami Island, it is always sealed and summoned in an imperfect state.

Known as the "Witch of the Void", Natsuki is a powerful attack mage who is strong enough to fight Kojou Akatsuki, Yukina Himeragi and Kiriha Kisaki at the same time.

Illusion: Natsuki can make an illusion that looks like her to trap opponents. [ova 5]

Enhanced agility: Natsuki has massive agility, like when she dodged both Yukina and Kiriha easily. Also, when she stood on an Electricity column in a street. [ova 5]

Sword: She can incarnation large sword in her especial dimension, a strong sword that defeated Astarte with just multiple hits. [ova 5]

My name is the Void. I am she who reduces broken vows to ashes by my eternal fires. Tear off your yoke of black blood, and return to where you belong! Offer your sword to the blue maiden, the blessing of your honored soul!