Edit
This article may require cleanup to meet the wiki's quality standards.
The specific problem is: Personality section could be rewritten in a more neutral, encyclopedic tone. Please help improve this article if you can. (May 2021)
This template may be removed if the issue has been addressed, or if this template was placed in error.

Sayaka Kirasaka (, Kirasaka Sayaka) is one of the main protagonists. She is a friend of Yukina Himeragi who was ordered by the Lion King Organization to take charge of multinational magical crimes in the Foreign Affairs Division. Being a Shamanic War Dancer, she is often assigned various missions, including espionage and VIP protection. She became the second blood partner of Kojou Akatsuki, and developed feelings towards him.

Sayaka is a beautiful teenager with knee-length brown hair that is tied in a long ponytail with square bangs hanging on the right side and turquoise-green eyes.

In Episode 5, Sayaka is seen wearing a dark red Qipao.

For the majority of Season 2, Sayaka wears a purple bikini top and a flowered beach dress, due to the season mostly taking place in Blue Elysium. 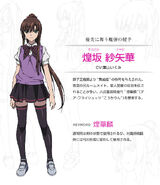 Kirasaka Sayaka in the OP

During Sayaka's first introduction, her most noticeable traits are her obsessive attachment to Yukina Himeragi and a severe case of Androphobia, or the fear of men, which was caused by her late father physically abusing her.[Citation needed] This paints Sayaka as an overprotective, confrontational individual. However, on the inside, Sayaka is actually kind and gentle to those she holds close to her, if not slightly cynical towards her current situation.

Sayaka, like most of the other characters, is a very powerful fighter and thus she has extreme confidence in her skills as a War Dancer. This confidence, coupled with her natural fighting ability, her sword (The Lustrous Scale/Koukarin), and aggressive fighting style makes Sayaka a force to be reckoned with much like (and most likely surpassing) Yukina Himeragi, Gelda and other attack mages.

However, sometimes when fighting, Sayaka does tend to lose herself in emotion if she has a vendetta against her enemy. In fact, Kojou Akatsuki himself ended up being the target of Sayaka's blind rage when she attacked him on Saikai Academy's rooftop, convinced that the vampire had stolen and defiled her only childhood friend. Kojou, unwilling to harm a woman, would've probably lost of not for Asagi Aiba's interference, the injury of which caused Kojou to go berserk himself.

Interestingly enough, Sayaka's Androphobia doesn't apply to males that are non-human, such as Kojou or Dimitrie Vatler. While the earlier seasons point out Sayaka's hatred of males to be so extreme that she outright disobeys her superiors due to their gender, it receives less focus as the series continues, save for the occasional remark or offhanded comment.

Speaking of offhanded comments, Yukina once mentioned that Sayaka was infamous for her aversion to mobile phones because she couldn't stand men's voices so close to her ears, as even listening to one talk normally is bad enough for her.

Sayaka is apparently a decent cook, as she made and sold chocolates during Valentine's Day at the High God Forest.

From the Warlord's Empire[]

Sayaka first appeared along with Vatler at the banquet held by the latter, while showing clear distaste at Kojou Akatsuki's familiarity with Yukina Himeragi. However, her harsh attitude toward Kojou changed after both of them teamed up together to rescue Yukina and Asagi Aiba from Christoph Gardos' kidnapping, where Kojou's kindness towards her caused her to fall in love with him, although she's still somewhat reluctant to admit it.

Sayaka first appeared in the burned down church confronting Motoki Yaze, urging him to tell her about the whereabouts of Kojou Akatsuki and Yukina Himeragi after their disappearance from Itogami Island, while both Asagi Aiba and Nagisa Akatsuki went to the said church. When Asagi and Nagisa met her, Asagi freaked out and pointed at Sayaka as she's still highly suspicious of her because of her involvement with Kojou. Later, they ended up working together, albeit reluctantly, to rescue Kojou and Yukina.

Fiesta for the Observers[]

As a Shamanic War Dancer, Sayaka specializes in hexes and assassinations.

I, War Dancer of the High God, as a dancer of the Lion, beseech thee... Enku of the Aurora, Qilin of radiant light,

thou who doth rule thunder and the heavens, come clad in raging fire to pierce Hell's monstrous demons!