From the Warlord's Empire I

From the Warlord's Empire I (戦王の使者篇I, Sen'ō no Shisha Hen Ichi) is the fifth episode of the Strike the Blood anime.

It's nearly time for the Saikai Academy ball sports tournament, and Yukina and Nagisa are all fired up to act as cheerleaders! And thanks to the workings of Motoki and Rin, Kojou and Asagi are paired up to participate in the badminton doubles match for their class. Meanwhile, Natsuki is occupied with the capture of some therianthropes that have appeared in the warehouse district, and someone is targeting the Fourth Progenitor again... 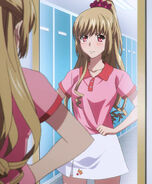 Add a photo to this gallery

Retrieved from "https://strike-the-blood.fandom.com/wiki/Strike_the_Blood_Episode_5?oldid=24038"
Community content is available under CC-BY-SA unless otherwise noted.