Yukina Himeragi (, Himeragi Yukina) is the female protagonist of the series. She is an attack mage, or in the Lion King Organization, a Sword Shaman, who is sent by the Lion King Organization to observe the Fourth Primogenitor, Kojou Akatsuki. As she's appointed to observe him, she became a middle-school student studying in Saikai Academy who follows him everywhere and is also ordered to kill him if he becomes too powerful and insane to control himself. She is also the first blood mate of Kojou, and thus being the first, her blood smell is always associated with Kojou's own smell, which has been pointed out many times by other characters who could smell blood, probably due to her blood interbreeding with Kojou's as she was the one who activated Kojou's first 'real' vampiric act. Also, unknown to her, she was intended and prepared by the Lion King Organization to be his lover.

Yukina has the appearance of a beautiful young middle-school girl (she has been quoted often times as extremely cute, that even older male students were interested with her upon seeing her picture for the first time that she was even called the princess of their class and she has been begged by all of her male classmates to be their cheerleader in order to win their games) with shoulder-length dark-brown hair that has a fringe around the eyes and bangs either side of her face and dark golden-brown eyes.

She is often wearing the Saikai Academy school uniform and she also carries around a guitar case around on her back wherein which she keeps her Schneewalzer. 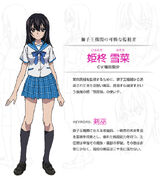 Yukina's personality is accentuated by a peculiar naivety where she generally appears to be a sweet, soft spoken and unassuming girl, but however, a far cry from being a damsel in distress as she is an extremely good fighter, both with hand to hand combat and with lance wielding. Since she was brought up in the Lion King Organization as a soldier, her views on the outside world are different like when she went shopping with Kojou Akatsuki, she thought a golf club was a weapon and a pressure cleaner was a flamethrower. She is also can be noted as quite a kind and caring person.

Her goal is to observe Kojou and defeat anyone who she deems a threat. She soon developed special feelings for Kojou which is often hinted through her facial expressions of how upset she is whenever Kojou becomes interested or makes the other girls his blood mate. She has a slight tsundere tendencies. Despite being jealous a couple of times whenever Kojou is around other girls, she never dwells bitterness and hatred towards the other girls Kojou had been interested in, and even on most occasions befriends them, as seen with her interactions with Kanon Kanase and Astarte. Yukina is also protective of the people close to her, even if they are capable of protecting themselves. When Kojou were to notice her reaction and asked her 'why' she tends to answer that 'she's his observer', it is apparently for to convince herself more than Kojou himself.

Shikigami Summoning: She can summon a Shikigami. A Shikigami can send messages or alert the summoner if anything happens.

Enchanted Meteoric Iron Knife (Anime): She used this enchanted knife against Amatsuka, when she protected Kanon from him.

Sekkarou: Or the Schneewalzer, the lance grants her support enchantments and it can also utilize divine vibration that can negate magic of any kind. However, due to her high affinity with the divine weapon, Yukina was on the verge of transcending to a being equivalent to a Faux Angel. Fortunately, thanks to the ring given to her by her mentor, her transformation into an angel has been halted.

Faux Angel: Like mentioned above, due to her high compatibility with Sekkarou, she has a risk of becoming a faux angel and losing her humanity permanently. During her angel mode, she has various abilities similar to Kanon, most prominently flight.

Familliar Summoning: After Hektos, the sixth kaleid blood, choose Yukina as the inheiritor of her familliar, she gained the ability to summon Minelauva Iris

I, Sword Shaman of the High God and priestess of the Lion, beseech thee. Dawn light of exorcism, spirit wolf of snowy mist, grant me the divine might of thy steel, that I may smite a hundred evil spirits!

I, Sword Shaman of the High God and priestess of the Lion, beseech thee. Spirit wolf of snowy mist, fashion a shield from the echoes of the thousand swift ones, and expel this calamity!

Magic: Yukina, along with other orphan children who were trained by the Lion King Organization to utilize magic. Shown techniques:

Divine Spirit Possession: Yukina is capable of summoning a divine spirit, basically a god, so it can possess her and give her an advantage in battle. With this she was able to defeat Natsuki Minamiya's Rheingold guardian, which was a threat for Yukina and Kiriha Kisaki moments before. The possession is an extremely risky process because if she loses her concentration on the technique even for a moment, her ego may be eroded by the divine spirit, losing her individuality permanently. In her fight against Natsuki, she mentions that the reason why Yukina was chosen as Kojou Akatsuki's observer is probably because she can do this, which in turn means that the Lion King Organization wanted Kojou to have a mate with such an extremely rare and powerful ability (probably for the coming battle against Cain).