Strike The Blood Wiki
Register
Don't have an account?
Sign In
Advertisement
in: Characters, Mage, Female,
and 2 more
English

Edit
watch 01:36
We're Getting Mutants in the MCU - The Loop
Do you like this video?
Play Sound

Yuuma Tokoyogi (, Tokoyogi Yūma) is a childhood friend of Kojou Akatsuki and Nagisa Akatsuki. On the night before Halloween Fiesta, she hinted to Kojou that she wasn't human, and soon after, she kissed his lips, causing their bodies to swap. She is revealed by Dimitrie Vatler to be the daughter of Aya Tokoyogi and took Kojou's body in order to free her mother who was imprisoned in the Demon District Prison Barrier. She became the fourth blood partner of Kojou.

However, her powers and abilities seem to rival to Natsuki Minamiya's power, she took Kojou's body because the spell she needed to break the barrier on the Demon District Prison required an immense amount of magical power. The original plan was to sacrifice 100,000 citizens of Itogami Island in order to break the seal; but when the Library found out about the Fourth Primogenitor, the plan was changed. If she succeeds in doing so, other legendary magic criminals will also be freed. When she finally manages to enter the prison barrier she sees Natsuki, who was sleeping on a throne like chair for 10 years. It is then revealed that the Demon Prison Barrier can only be used by Natsuki. In addition, if she is killed, the prison barrier will be destroyed, allowing the inmates to be freed.

When she attempted to kill Natsuki, whilst inside Kojou's body, Yukina Himeragi stabbed her using her Schneewalzer Wolfin, which can negate magic of any kind using its divine vibration, forcefully causing them to return to their original bodies. When she failed to release the seal on the Demon Prison Barrier, she was stabbed from behind by her familiar. The sword of Le Bleu simultaneously stabbed through Natsuki via a portal, resulting in the weakening of the barrier and the escape of seven extremely powerful criminals, including Aya.

Yuuma has been portrayed as a very attractive and even beautiful girl,with short brown hair that has long bangs obscuring most of her forehead with a center bang covering the center of her face and purple eyes. 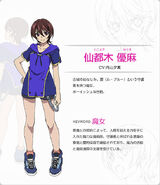 Yuuma is a very caring girl, with traces of playful attitudes implying her mischievous nature. She looks independent on the outside, but is actually desperately searching for a purpose in her existence, which causes her to break up Prison Barrier's security to release the criminal Aya Tokoyogi despite her kind nature, lest losing her raison d'etre.

Yuuma first met Kojou Akatsuki and Nagisa Akatsuki when he was trying to retrieve Nagisa's hat stuck on a branch off the edge of a cliff. Kojou decided to look in the regular spot where Yuuma hid and watched them everyday; he asked her for her help. She quickly grabbed his hand and dragged him over to the cliff. By working together they got Nagisa's hat back. However, after they doing so Kojou fell off the cliff only to be saved by Yuuma; he thanked her and said that she's pretty strong. Soon after they introduced themselves.

She is a clone that was forced to grow by parthenogenesis. Later, she became a witch and broke the Demon Prison Barrier; both of which were instructions programmed into her by Aya Tokoyogi (Yuuma's "mother"). Yuuma told Kojou that there was nothing she could call that was hers, except the fact she met Kojou.

Holy Knight of the Sunset[]